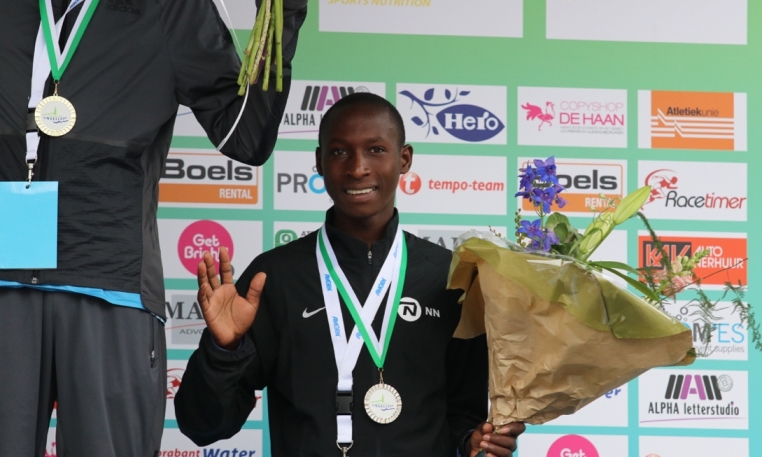 Proudly boasting with the likes of Joshua Cheptegei, Stella Chesang, Moses Kipsang and Boniface Kiprop, Uganda is fast becoming known as a nation to be reckoned with on the international racing circuit in the middle and long distances.

It seems that the East African nation has unearthed another gem in 22-year-old Abdallah Mande. Mande, who trains in the mountainous region of Kapchorwa along with the likes of Cheptegei, Chesang and others, made his international debut in 2012 at the age of 16 when he represented Uganda at the Africa Cross Country Championships in Cape Town.

In 2014 he also made his first appearance on the road, a surface he seems to have taken a great liking to if recent results are anything to go by. Mande made his debut on the road in the Hemmeromloop 10km on 31 August in Holland and promptly ran away with the victory, clocking 28:38. More impressive though was his performance in Prague a week later at the prestigious Birell Grand Prix 10km race – a race that attracts amongst the biggest names in global road running. The then 18-year-old finished an incredible 9th and lowered his 10km time down to 28:32. Mande further dropped his 10km PB to 28:20 a year later when he finished 3rd at the Houilles 10km in France.

While still running solid performances on the track and in cross country, Abdallah Mande seems to be heading to the roads as his main focus, adding a 15km to the three 10km races he ran in 2015. That 15km race, the Scholten Awater Zevenheuvelen 15km, was a big breakthrough for the youngster as he clocked an impressive 43.35 and was a clear sign of things to come.

Mande has only raced in three half marathons and all of them have been under 61 minutes. On his debut in 2017, Mande finished second in 60:51 at the Bredase Singelloop race. Mande has already run two half marathons in 2018, finishing 4th in Barcelona in February and bringing his PB down to 60:18, before taking a further 4 seconds off his best to clock 60:14 at the Venloop Half Marathon in Holland on 25 March. The last two races show that Mande is in good form as he prepares for the Absa Cape Town 12 ONERUN on 20 May.

“I am excited and looking forward to racing in Cape Town. I know after my two half marathons this year that I am in good shape and expect to run well.” On just what that means, Mande was a bit cagey. “I won’t put out a time, but I am not coming to Cape Town on holiday, I want to win. My training partner, Joshua (Cheptegei) won in Durban last year (Absa Durban 10K CITYSURFRUN) and I want to win in Cape Town. So if the pace is fast, I will go with it. If it is slower, I know I have a strong finish, so I feel very confident in my ability to win.”

The Absa Cape Town 12 ONERUN produced the fastest ever 10km time in the world, when Morris Gachaga crossed the line in 33:27 in 2017. The world best was under threat from the inaugural race in 2015 when Emmanuel Bett missed out on the then World Best of 33:31, by one second. A year later, Stephen Mokoka claimed the title, 3 seconds shy of the World Best, until Gachaga came along to take 4 seconds off the best. While there is no talk, yet, of any record attempts, it is clear that the Absa Cape Town 12 ONERUN has grabbed the imagination of the running world and continues to attract top international athletes.

“We have always believed that South Africans need world class competition on home soil.  The first three years of the Absa Cape Town 12 ONERUN have proven that. For us it is exciting that we have athletes of the calibre of Abdallah (Mande) and others come to South Africa to take on our best athletes.  We are expecting another great tussle through the streets of Cape Town on 20 May,” said Michael Meyer, Managing Director Stillwater Sports.