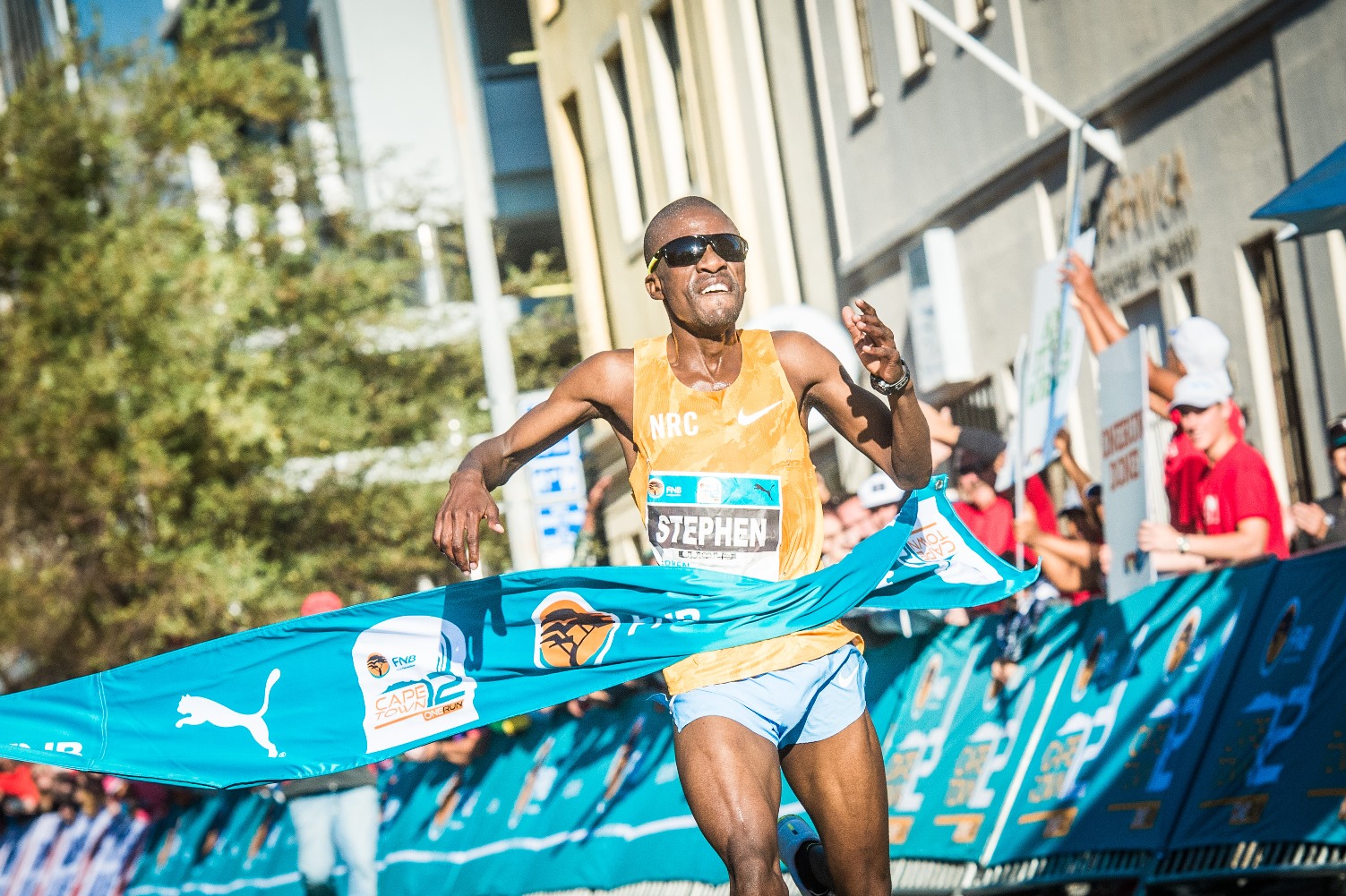 Making his 10km debut, South Africa’s Stephen Mokoka showed the international contingent and the top three from 2015, Emmanuel Bett, Daniel Salel and Timothy Toroitich, a clean pair of heels at the 2016 Absa Cape Town 12 ONERUN that took place in the Mother City on Sunday, 15 May 2016.

Some 13 000 runners lined up in Marine Drive, Milnerton next to Woodbridge Island for the second running of the Absa Cape Town 12 ONERUN.  As in 2015, conditions were near perfect with the temperature sitting on 12 degrees.

A frenetic start saw the first kilometre being covered in 02 minutes 41 seconds.  When the lead bunch of fifteen athletes went through 3 kilometres in 08 minutes 17 seconds, it was clear that the chase for the World Best time of 33 minutes 31 seconds was on the cards. Defending champion Emmanuel Bett of Kenya and country man Daniel Salel, were driving the lead bus with South Africa’s Stephen Mokoka and Elroy Gelant in close attendance.

Both Gelant and Mokoka had made it very clear before the race that they were intent on making sure that the winner’s purse stayed on home soil.

The 5 kilometre mark came just inside the Harbour grounds as the athletes turned off Marine Drive, passing in 13 minutes 55 seconds.  Once in the harbour, it was Bett who started to turn the screws to try and shake off the South African challenge, with Salel on his shoulder.

The 9 kilometre mark was reached in 25 minutes 11 seconds.  Salel, Mokoka and Gelant turned into Bree Street simultaneously for the final kilometre.  Gelant fell off with 800m to go. Salel and Mokoka raced neck and neck to the line with Mokoka edging the Kenyan by 1 second, coming home in 33 minutes 34 seconds to the 33 minutes 35 seconds of Salel.

With that Mokoka shattered the previous record of Mathews ‘Loop ‘n Val’ Motshwarateu by 49 seconds and missed out on the World Best time of 33 minutes 31 seconds by a mere 3 seconds.

“It was a hard race”, said Mokoka afterwards. “Salel pushed my right to the line but I am happy that we won the race for South Africa. Elroy (Gelant) and I worked together and were talking to each other the whole way. So I am happy we were able to work as a team.” Mokoka has been adamant that South Africa has the ability to take the race to the Kenyans if they work as a team.

In the women’s race, Irvette Van Zyl was first across the line. Whilst most expected that, Van Zyl had been battling with the flu for close on a week and almost withdrew after 4 kilometres in.  “It was hard. I felt really bad and wanted to just stop.”

Van Zyl hung on though and despite feeling out of sorts went into the lead after 7 kilometres and was never headed.

“When Lebogang went through the first 2 kilometres in 6 minutes I was hanging on as best I could.  I do not know how I was able to just stick it out.  I am very surprised by the win.”

Van Zyl was originally planning on chasing the SA Best time of Elana Meyer (38 minutes 39 seconds), but having just recovered from flu she set her sights on the win instead crossing the finish line in 39 minutes 40 seconds.

“We are incredibly excited to be part of this race which boasts the best athletes from South Africa, Africa and around the world as well as ordinary citizens from all walks of life. We hope and trust that all participants were inspired by the running excellence on display and enjoyed the race,” adds Stephan Claassen, Absa Business Provincial Head.

Charity Support:  When entering online, runners could choose to support either or both of the Absa Cape Town ONERUN Charities:  The Cape Of Good Hope SPCA and Die Burger Kersfonds.