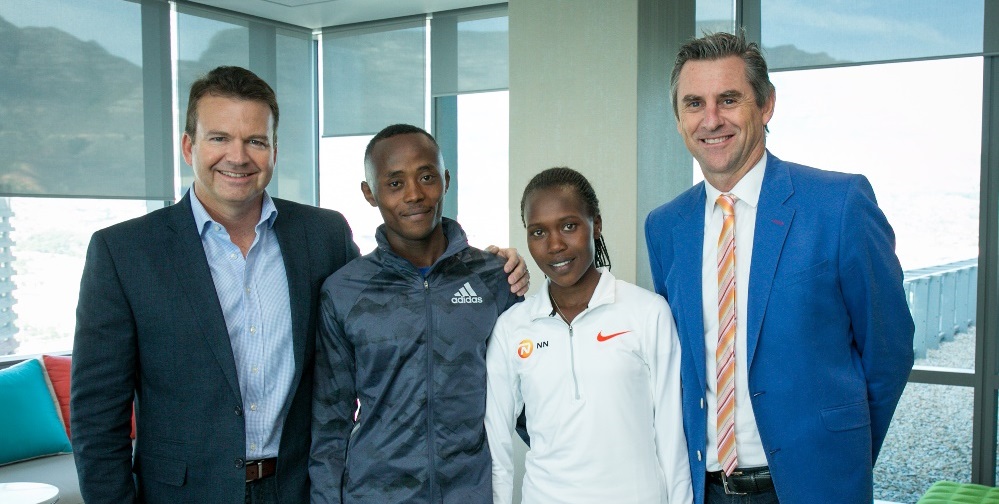 A host of top international and local athletes has been secured for the 4th annual Absa Cape Town 12 ONERUN that will take place this coming Sunday (20 May), giving the race a Kenya vs Uganda vs South Africa element.

With the defending champion, Morris Gachaga of Kenya (he set a world best over 10km in the 2017 edition) and the 2018 women’s 10 000m Commonwealth Games Champion, Stella Chesang (Uganda) headlining the field, the race is sure to be a fast one.

Neither Gachaga nor Chesang are guaranteed wins as the line-up boasts an incredible array of talent. Included in the men’s field are Kenyans John Langat and Noah Kipkemboi and Abdallah Mande of Uganda.

Gachaga boasts the world best time over 10km of 33:27 run here in 2017, but has also dipped 60 minutes for the first time in the half marathon this year, running 59:36 at the RAK Half Marathon in the UAE in February. That performance, which sees him ranked 8th in the world in 2018, will be a serious warning shot across the bow to his rivals as he is clearly in the best shape of his life.

“I am in really good shape,” said Gachaga, “and while I respect my fellow runners, I know I am capable of going very fast. I won’t make it easy for them.”

While Gachaga is in good form, his opposition is by no means to be ignored. Stephen Mokoka, the South African 10km record holder (27:38 – Manchester 2015) in particular wants to win back the title he claimed in 2016. Mokoka feels that he lost out on the title in 2017 after battling with injury. “I am fit this year. No injury problems like last year and I have trained for this race.” Ominous words, as Mokoka is well respected by his competitors around the world.

On the women’s front, Stella Chesang has to start as the race favourite. The 2015 World mountain running champion showed just how strong and tough she is when she went to the front in the women’s 10 000m at the 2018 Commonwealth Games at the 8000m mark. To lead from the front for 2km and still win is incredibly tough as those running behind tend to sit in the wake of the front runner and conserve their energy, saving themselves for the final kick. That final kick was not good enough as Chesang went on to win in 31:45.30, the 4th fastest time in the world this year.

It is Jackline chepngeno’s first year back on the running scene after giving birth to her first born in 2017. However, the 25-year-old Kenyan boasts a best 10 000m time of 31:27.73 which she ran in Durban at the Africa Championships in 2015, finishing second.  Boasting also a 71:50 half marathon time, Chepngeno certainly has the pedigree and experience to mount a serious challenge on the title.

The South African challenge is expected to come from in-form Kesa Molotsane from the Free State and local lady, Nolene Conrad as well as Glenrose Xaba. Molotsane has run and won two 10km races this year already, winning in Cape Town on 25 March and in PE on 5 May (she ran a season’s best time of 33:46). Conrad is in arguably the best shape of her career, representing South Africa at the World Half Marathon Championships in Valencia on 24 March where she smashed her life time best for the distance by over a minute, improving from her 72:52 to 71:44 and in the process earning herself IAAF Gold Label Status – a status which increases her value at international road races, dramatically.

Will the women be able to challenge the course record of 38:22 run by Vivian Cheriuyot in the inaugural race in 2015? Only time will tell, but the depth and pedigree in the 2018 line up is such that the women’s race will be a scintillating race.

At stake is a whopping R30 000 for the athlete (male and female) who crosses the line first.