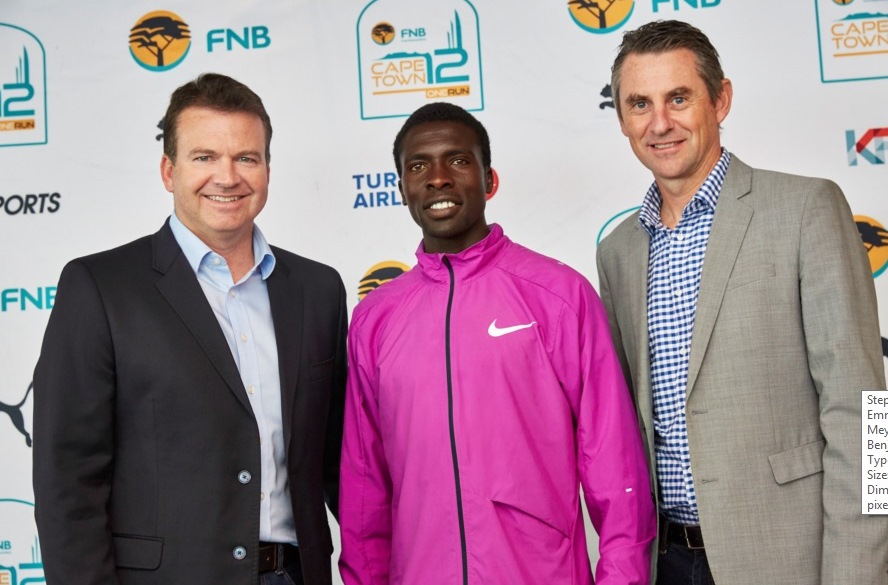 It is South Africa versus Kenya, Gelant versus Mokoka and Van Zyl versus the Phalulas on Sunday 15 May in the second running of the Absa Cape Town 12 ONERUN.

Once again the organisers have been able to gather a quality field and expectations are high for not only fast times, but an extremely competitive race. In 2015 Kenya’s Emmanuel Bett was able to edge compatriot Daniel Salel on the line, both being awarded the same time of 33:32.

It is not often one sees a sprint finish and a dip for the line in road running, but in 2015 that is what was experienced as Bett and Salel swopped the lead three times in the final kilometre.  In the process of trying to break each other they narrowly missed out on the world record – by one second. In 1985, Moses Kigen was timed at 33:32 in Portland to set one of the longest standing world records.

Bett, Salel and third placed finisher, Timothy Toroitch are back again and Bett is itching to claim the world record. “It was so close in 2015, I know we can break it and that is why I came back,” says Emmanuel Bett. “We Kenyans are always happy when one of our country men wins a race, but that does not mean that we don’t want to win it ourselves,” said Daniel Salel. “I did not come here to lose out again so it will be hard race on Sunday.”

But neither Bett, nor Salel can afford to discount the South African challenge. Both of South Africa’s top middle distance athletes, Stephen Mokoka and Elroy Gelant, are in incredible  shape and are loath to see a ‘foreign invasion’ run away with the laurels.

“We cannot have the Kenyans come here and take the wins in our home country. They will have to fight for it,’ South African 10km record holder, Stephen Mokoka said. “Last year the leaders went through 10km in 28:40 (the SA record is 27:38), so the Kenyans set a brutal pace. I am in much better shape than in 2015 and want a podium position,” says Elroy Gelant.

The winner on race day will make off with R40 000; to sweeten the pot further a record incentive of R10 000 has been dangled for the South African athletes should the SA record fall.

Unbeaten this year and absolutely dominating the women’s running scene is Irvette van Zyl who is targeting Elana Meyer’s SA record (38:39). “It is a tough record, but both my coach and I feel that I could scare (?) it if the weather plays along on race day,” said van Zyl. “She will need to run at 3:13/km pace,” her coach Lindsey Parry said. “But she is in almost the best shape of her life and with the aid of men running around her, she could well break the record.”

There have been some slight changes to the course from 2015. Instead of running up the Company Gardens, the race will now take runners in a loop up and down Adderley Street , up Long Street and back down Bree Street to the finish outside the Portside building.

“The new route is more spectator friendly and , we feel, a lot faster than that of 2015,” says Michael Meyer, Managing Director of Stillwater Sports. “There is no reason why the South African record in either the men’s or the women’s race can go, if not in both races.”