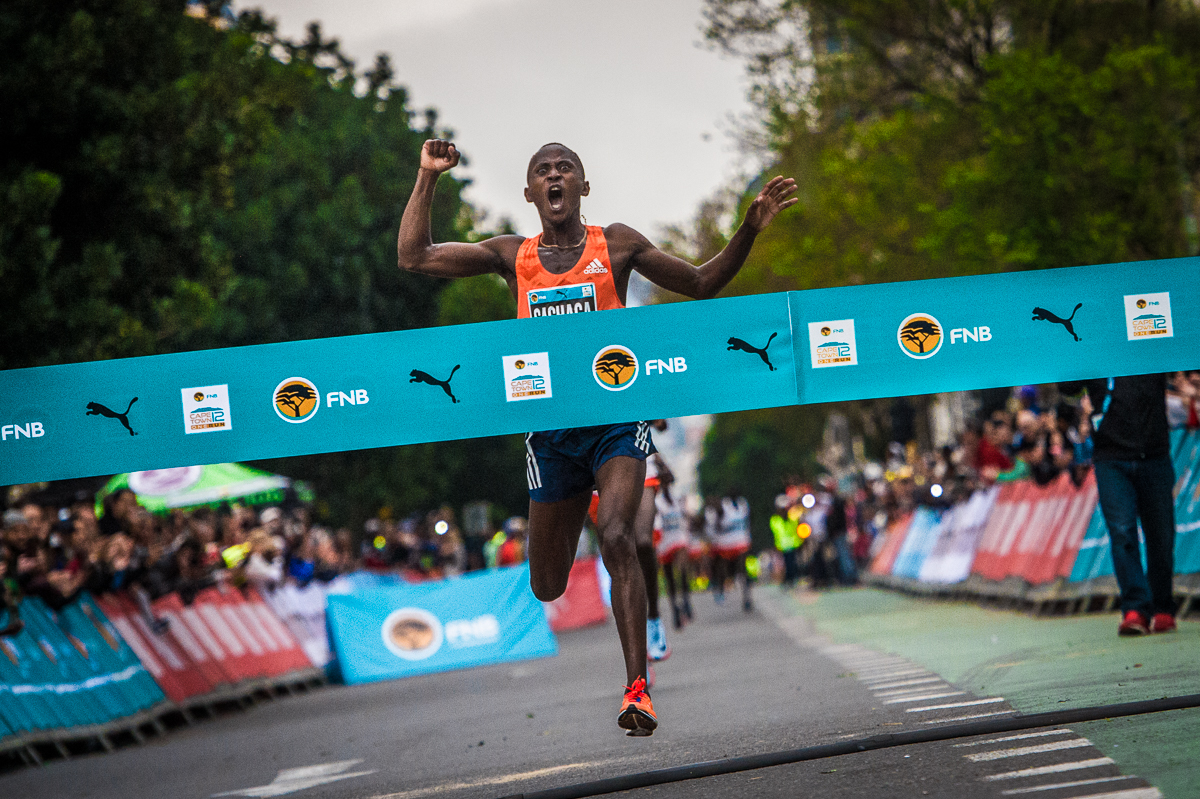 Two-time defending champion, Morris Gachaga will be back on Sunday 19 May to look for a hat trick of wins at the Absa Cape Town 12 ONERUN.

Gachaga seems to have made this race his own, after winning for the first time on debut in 2017 with a world best time of 33:27, before successfully defending that title in 2018. Now the 24-year-old is back to look for three in a row.

Based on previous experience (knowing the route) and a sky high confidence, Gachaga will have a bulls-eye on his back, as the rest of the field look to dethrone him. It will not be easy though; already Gachaga has run the 7th fastest time in the world this year in the half marathon when he finished 5th at the Ras Al Khaimah Half Marathon in the UAE on 8 February. He followed that up with a 60:09 in Bahrain on 15 March. All this was a build up to his debut marathon, the Paris Marathon on 14 April, where he finished 4th in 2:07.46.

The marathon will have been five weeks before his title defense in Cape Town and by then he should have recovered from his endeavors. The strength and endurance he built up for the marathon will stand him in good stead come race day, and with his natural speed, we could even be in for a new World Best.  On that prospect, Gachaga is staying mum, but he is certainly not coming as a member of the party, he wants to win.

“I cannot say about the World Best on the 19th, but I want to defend my title,” said Gachaga from his training base in Kenya. “I know the course.  I know how to run it.  So I think I have an advantage. I feel good after Paris and am not worried that my legs will be tired for Cape Town.”

Since his first title in 2017 at the Absa Cape Town 12 ONERUN with that World Best of 33:27, Gachaga has gone from strength to strength. His half marathon times have dropped from 60:38 to 59.36 to his current best of 59.22. Since his 2017 win, he has also finished outside the top five only twice out of eight races and is fast making a name for himself on the international road circuit.

Such was the respect for his pace judgement, that he was the pace maker for the great Eliud Kipchoge in the 2018 London Marathon. His 2:07.46 Marathon debut has elevated his profile substantially and his coming back to Cape Town is a massive coup for the organisors.

“That Morris (Gachaga) is coming back to try and get a hat trick of wins at the Absa Cape Town 12 ONERUN, is a big coup for us. He is the holder of the World Best time in the 10km and has made his name internationally.  His return shows just how the Absa Cape Town 12 ONERUN has grown over the years, rightfully securing its place on the international circuit. We are immensely proud of how far this event has come and we look forward to welcoming Morris back.  We expect a great race from him,” says Michael Meyer, Managing Director Stillwater Sports.

In the space of four years, the race has attained IAAF Bronze Label Status, an incredible achievement in such a short space of time.