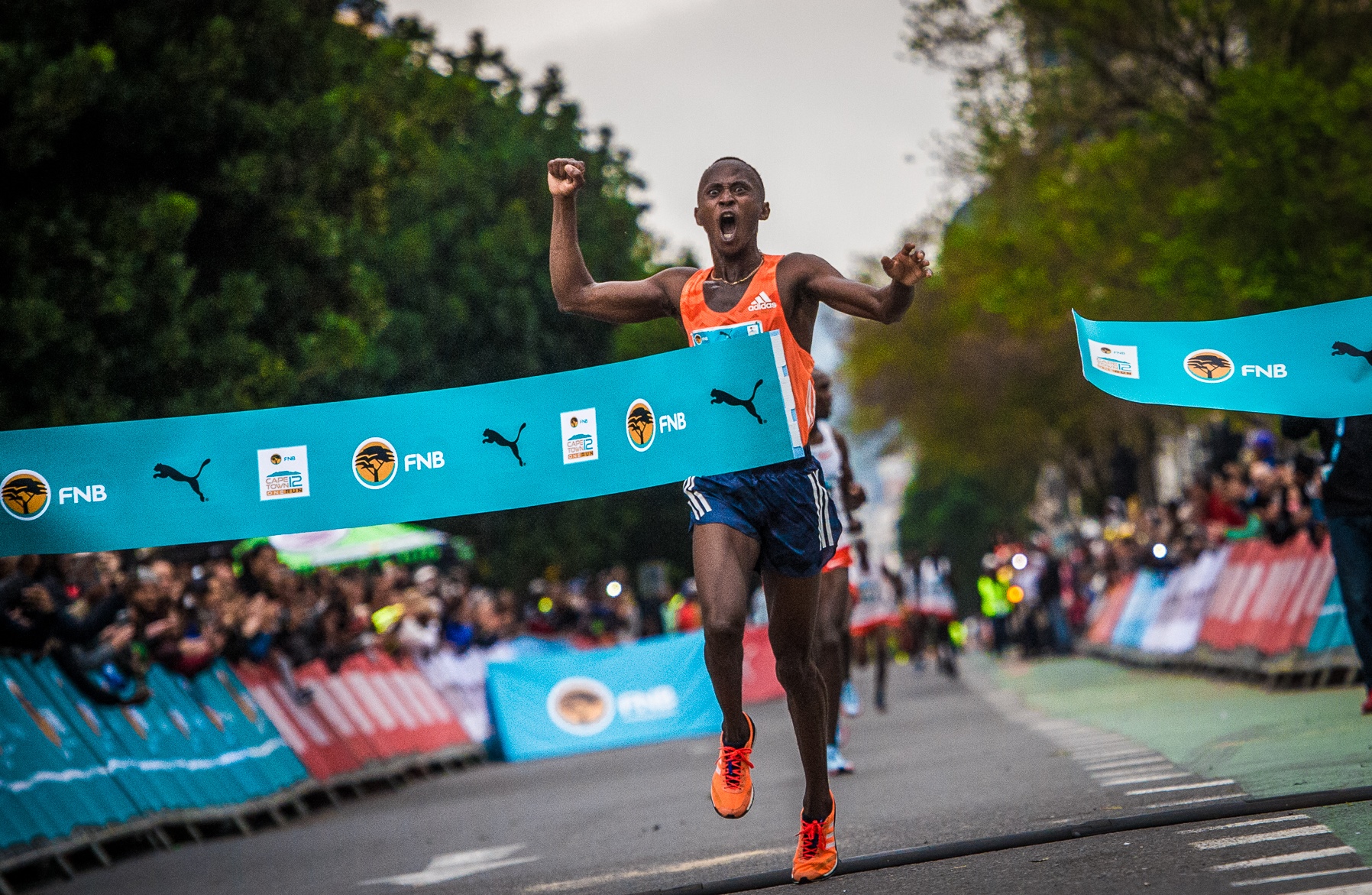 Race favourite, Morris Gachaga lived up to his billing by successfully defending his Absa Cape Town 12 ONERUN title in a controlled race on Sunday, 20 May 2018.

Gachaga crossed the finish line in Bree Street in 33:42, some 15 seconds off of his world best time from 2017.

“The field was stacked, so racing for the win was more important than chasing my time from last year,” Gachaga said after the race. “We did start out fast, for the first three kilometres we were on record pace, but then we started watching each other and the pace dropped a bit.”

Those first 3km were passed in 8:15, 5km going by in 14:02 with all the main contenders in the lead pack of twelve  athletes. Gachaga, after driving the pace to the 3km mark, then slipped back into the pack with Kenya’s Victor Chumo talking up the front running. He was watched closely by Uganda’s Abdallah Mande, Mande Bushendich, Eritrean Filmon Ande and Chumo’s countrymen, Mathew Kimutai and Noah Kipkemboi. South Africa’s title hopes were represented by Joel Mmone, Stephen Mokoka, Gladwin Mzazi and Thabang Mosiako.

The South African challenge fell away just after 8km which was covered in 22:47, with only Stephen Mokoka, the 2016 Champion, still in the mix. 10km came and went in 28:25 and it was at this point that Gachaga and Chumo kicked again, dragging Mande Bushendich with them as they excited the Company Gardens. On the climb up Wale Street, Chumo surged again and as they entered the final 800m in Bree Street, Chumo and Gachaga had broken away from John Langat (Kenya), Abdallah Mande and Mande Bushendich, with Mokoka dropping off further.

Chumo and Gachaga raced down Bree Street where Gachaga’s knowledge of the route giving him the advantage as he timed his sprint to the line perfectly, passing Chumbo in the final 300m to defend his title.

The ladies race saw Kenya’s Jackline Chepngeno take control after 2km. Uganda’s Stella Chesang, who was widely tipped to win the race after winning the 10 000m title at the 2018 Commonwealth Games, hung on till 9km, before she had to give way to the relentless surging of Chepngeno. For Chepngeno the victory was the perfect start to 2018 after having taken 2017 off from racing, having given birth to her son.

“The last kilometre I was worried about Stella (Chesang) after her win in Brisbane (Commonwealth Games), so I ran really hard. I did not know where she was, so I needed to race to the line,” said Chepngeno. “Winning was really good for me. This was my first race back after my pregnancy and it is a big confidence booster for me.”

Kesa Molotsane continued her good form of 2018, by finishing 3rd in her first ever Absa Cape Town 12 ONERUN in 39:53.

“The Absa Cape Town 12 ONERUN has become one of the hallmarks of the Mother City as people from all walks of life come out in their numbers to enjoy the experience. We at Absa Business take pride in being a part of this race as it is inclusive, innovative and supports the people and business community of the Western Cape. It also helps to share the great story of South Africa with the world.  A part of that great story is the high standards and competitiveness of sport in SA, and in this race in particular. As such, we would like to congratulate all the participants, especially the winners who displayed pure brilliance in finishing ahead against such a strong field,” said Stephan Claassen, Absa Business Provincial Head, Cape region.

Charity Support:  When entering online, runners could choose to support either or both the Absa Cape Town ONERUN Charities:  Die Burger Kersfonds and The Cape Of Good Hope SPCA.