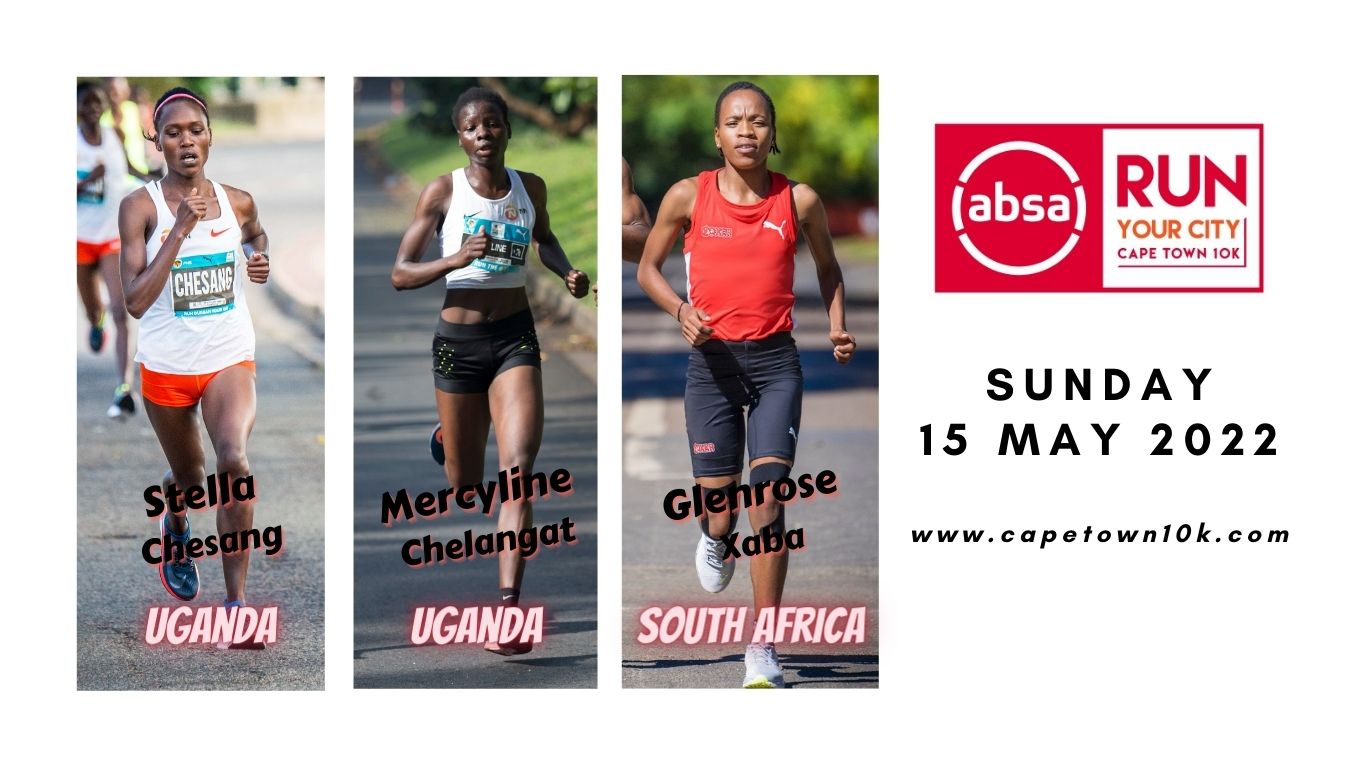 Following the recent announcement of Daniel Simiu Ebenyo (Kenya), one of the world’s leading male stars, the organisers of the Absa RUN YOUR CITY Series have announced the participation of two global female super stars: Stella Chesang and Mercyline Chelangat (both from Uganda) at the 7th annual Absa RUN YOUR CITY CAPE TOWN 10K on Sunday 15 May 2022.

Chesang and Chelangat will return to South Africa after a very successful (and exciting) display of racing at the 2018 Absa RUN YOUR CITY Series.

“Having these two athletes back in SA to run in the Absa RUN YOUR CITY CAPE TOWN 10K is really exciting both for the event and the sport of road running in SA and Africa – they are two of the super stars of international road running!” said Michael Meyer, Managing Director of Stillwater Sports and founder of SA’s leading 10km road running series. “Our goal is to have the World’s best runners compete against SA’s best on home soil, and ensure the event is a truly international event. Having Stella and Mercyline run in the Cape Town event is enormously exciting!”

Chesang won the 2018 Commonwealth Games 10 000m title. Shortly after this victory, Chesang made her SA debut when she took on the Absa RUN YOUR CITY CAPE TOWN 12K. A surprising upset saw her being beaten by Jackline Chepngeno (Kenya) at this event. Chesang returned to South Africa in October that year, the Absa RUN YOUR CITY Series bug had clearly bitten, to smash a stellar field in the Absa RUN YOUR CITY DURBAN 10K with a winning time of 31:14, smashing both the women’s course record and the Ugandan National 10km record, while coming within one second of the SA All Comers record. This was also a 30 second improvement on her personal best.

“It is good to be back racing. Covid hit us hard, and we have missed the running and racing scene,” said Chesang from her training base in Kapchorwa, Uganda. “I’m looking forward to returning to Cape Town for the Absa RUN YOUR CITY CAPE TOWN 10K. That was my first ever race in South Africa and I have fond memories of the race. I am wiser, fitter and stronger and expect to have a really good run on 15 May.”

Joining Chesang will be fellow Ugandan friend and rival, Mercyline Chelangat. The two have met on four occasions in races with the score even on two wins each. In 2017 Chelangat had the upper hand beating Chesang in the Uganda 1500m (3rd and 5th) trials and placing better at the World Cross Country Championships (12th and 18th). But Chesang found her form in 2018 winning the Commonwealth Games 10 000m title where Chelangat finished third. The pair met again in the Absa RUN YOUR CITY DURBAN 10K later that year and again Chesang came up trumps, winning the race in 31:14 with Chelangat, the defending champion, second in 31:33.

Chelangat will be confident entering the Absa RUN YOUR CITY CAPE TOWN 10K after her win in the Poznan Polmaraton Half Marathon on 3 April where she clocked 69:24. The conditions which Chelangat faced in Poland where incredibly challenging. A strong head wind, cold temperatures and no pace makers left Chelangat with hard work to do on her own after she dropped the field after 15km. Until 18km she was on track for the course record, but the challenging conditions proved to be just too much in the final stages.

“I had a great run in Poland and know that I am close to my best shape. By May 15 I expect to be in the kind of shape that had me run my 31:33 PB over 10km and even better,” said Chelangat who ran her PB at the Absa RUN YOUR CITY DURBAN 10K when she finished second behind Chesang in 2018.

Leading the South African charge will be seven-time South African champion and fourth fastest South African ever over the half marathon distance, Glenrose Xaba. Now coached by Caster Semenya and running in the colours of Boxer Athletics Club, Xaba has unfinished business at the Absa RUN YOUR CITY CAPE TOWN 10K. On four consecutive occasions, Xaba has won the SA 10 000m title. With her 60:26 half marathon PB, Xaba is more than capable of going faster than her 32:45 PB set at the Absa RUN YOUR CITY DURBAN 10K in 2019, and with the international field already lined up against her, this will be the perfect time for her to get close to, if not under the 32min barrier.

“With Stella (Chesang) and Mercyline (Chelangat) leading the attack and SA elites such as Glenrose Xaba ready to counter, SA’s road running community will be treated to world class racing on their doorstep, further cementing the event as Cape Town’s most prestigious road running event.”