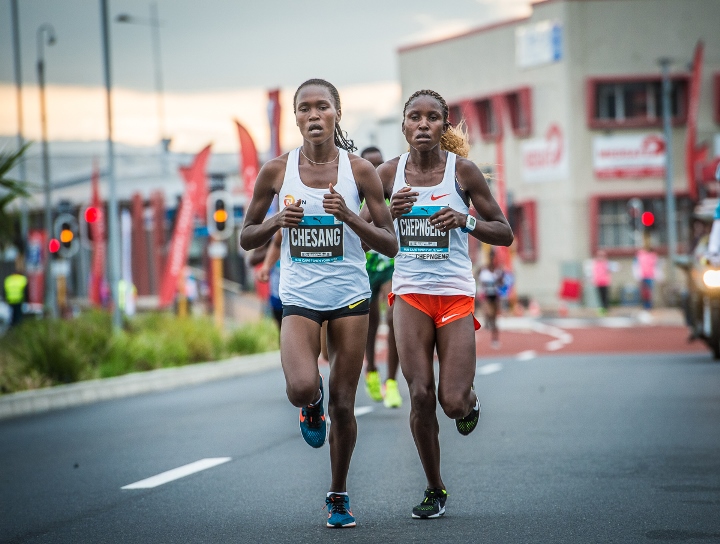 Seen here (from left to right):  Stella Chesang and Jackline Chepngeno  in action during the 2018 Absa Cape Town 12 ONERUN.

Stella Chesang will be back in action at the 5th edition of the Absa Cape Town 12 ONERUN on Sunday 19 May 2019.

Chesang had to play second fiddle to rising star Jackline Chepngeno at the Absa Cape Town 12 ONERUN in 2018, having to settle for second, despite being the favored athlete, especially after victory in the Commonwealth Games 10 000m.

Although she came back to South Africa to win the Absa Durban 10K CITYSURFRUN in October 2018 and set a new PB of 31:14 for the 10km, she does feel that she has unfinished business with the Cape Town race.

“I hadn’t recovered enough from Brisbane (Commonwealth Games). I had also raced hard frequently in the buildup to Brisbane. So I didn’t have the final extra push in the legs when Jackline (Chepngeno) went. But this year I have raced a bit less, with the only big competition the World Cross Country Championships in Aarhus.” Chesang won the Uganda National Championships to qualify for those World Championships.

Having focused solely on cross country in 2019, Chesang will be much stronger with the off road competition honing strength over speed. With her last competition being that of the World Cross Country Championships in Aarhus (Denmark), Chesang will have had time to recover and use that strength to great effect in her preparation for 19 May when she lines up for the 5th running of the Absa Cape Town 12 ONERUN and hopes to go one better than her second place from 2018.

Chesang opened her season with second place finishes at the Elgoibar and Seville Cross Country Races (Spain) on 13 and 20 January respectively and then winning the Uganda National Championships on 16 February before coming 21st at the World Championships in Aarhus, Denmark on 30 March.

Chesang has represented Uganda on 17 occasions and is fast developing a reputation as one of the new generation of athletes who will take athletics into the future. At just 22 years of age, she is already a world champion (World Mountain Running Championships 2015), a Commonwealth Games Champion (10 000m – 2018) and finished 4th in the 5000m at the World Youth Championships (2013) and 4th again in the same event at the World Junior Championships a year later.

Chesang is the first major international female athlete to be announced for the 2019 Absa Cape Town 12 ONERUN to take on the local challenge of Irvette van Zyl (2016 winner), Glenrose Xaba and Kesa Molotsane. “We are finalizing talks with a number of agents and expect to be making some big announcements in the Women’s race in the next week,” said Michael Meyer, Managing Director Stillwater Sports.

The Absa Cape Town 12 ONERUN has a history of bringing out some top quality competition, and 2019 is proving to be no different.