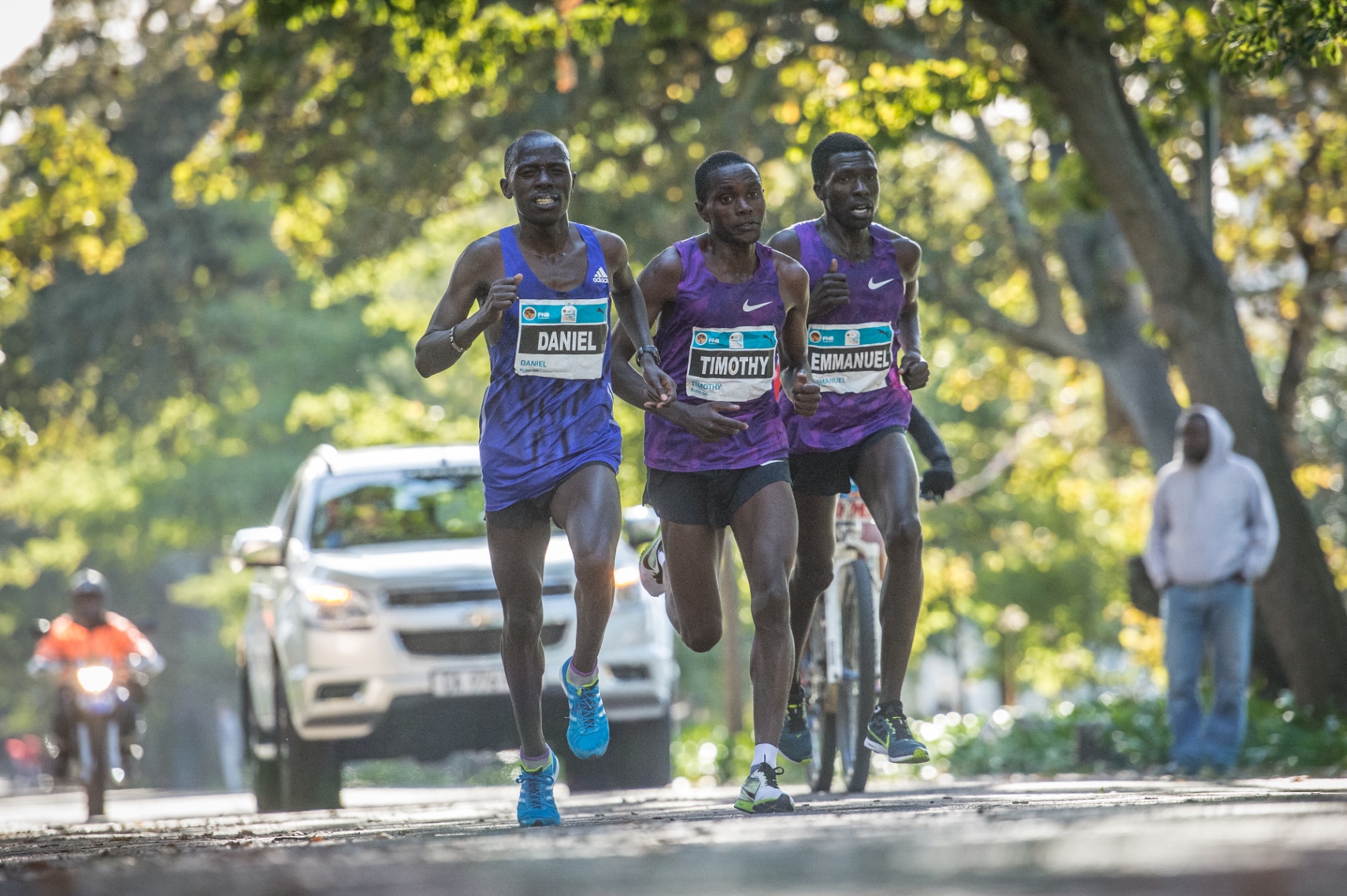 In a massive coup for the Absa Cape Town 12 ONERUN, Stillwater Sports announced today that the defending champion Emmanuel Bett, and the man who pushed him to the brink, Daniel Salel, (both from Kenya) will both be back to relive their battle in the Mother City come Sunday, 15 May. Third placed finisher Timothy Toroitich from Uganda will also be joining them.

“It is not every day that a race can bring back its top three athletes from the previous year so it’s fantastic news for us,” says Michael Meyer of Stillwater Sports. “Bett and Salel chased each other so hard in 2015 that they missed the worlds ’best time for the 10km by only one second. We could not have asked for a better debut for the race and with both coming back to race again knowing what lies ahead of them there is a chance that the world best time will go. Timothy only lost contact with the two in the final 2km and was also only 12 seconds off the winners. It is a huge achievement for us to be able to bring them back again.”

In a sprint finish that lasted the entire final kilometre of the 2015 race, the lead changed hands on three occasions until Bett was finally able to out-dip Salel on the line.

There is every reason to believe that 2016 will be just as entertaining as both athletes have shown great early season form as they prepare themselves for the Olympic Games in Rio. Bett has already been active on the roads this year, racing in two major international half marathons and clocking 61:55 at the RAK Ras Al Khaimah Half Marathon in the UAE in February and 62:37 at the highly competitive Lisboa Half Marathon (Lisbon) in March.

Salel too has been active, racing at the world best 10km in San Juan on 28 February and finishing 12th, clocking 29:14. More impressive though is his 30:10 on 31 January in Eldoret, Kenya. Eldoret lies at an altitude of 2100m which makes his 30:10 time a remarkable achievement indeed.

As in previous years, Toroitich has been very active off the track and roads, hitting the cross country circuit with some success. He was second in Amorebieta (4 January), 3rd in Sevilla (17 January) and 4th at Muguerza Elgoibar (25 January) whilst racing the prestigious Spanish Cross Country Circuit which sees some of the best middle distance athletes in the world prepare for their season ahead every year.

Salel has come very close to breaking the 27 minute barrier in the 10 000m. To run 27 minutes is the mark of an athlete that has achieved super status on the world stage, and Salel is not far off.  He was also second at the 2010 Commonwealth Games in the 10 000m.

Bett has also run 28:07 for the 10km on the roads, whilst Salel has run 27:41. With timing matts at the 5km and 10km marks, should the runners hit world best times at these points, they too will be ratified on the international stage, a stage which has now been set to once again bring some of the best athletes ever to be seen in South Africa, back to the Mother City.

Join in on the fun at the Absa Cape Town 12 ONERUN’s Friday 5k run:

Charity Support: When entering online, runners can choose to support either or both of the Absa Cape Town ONERUN Charities: The Cape Of Good Hope SPCA and Die Burger Kersfonds.